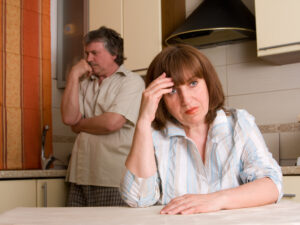 We all know the typical “I will fix it” response that many men are prone to take when their female partners talk about being in pain. Adopting a “fix it” approach does make some sense. None of us wants to see our partners suffer, and it is right in line with time-honored theories about pain behavior– communicating that you are in pain is meant to get attention and help.

However, when it comes to talking about pain, most women don’t expect their partners to actually “fix it.” According to more recent theories on communicating about pain, the purpose may not be as much to get things fixed, but rather as a way to gain empathy, to have someone else recognize the pain, and even as a way to strengthen intimate relationships. The fancy name for this theory is called the interpersonal process model of intimacy. According to researchers Annmarie Cano and Amanda Williams, talking about one’s thoughts and feelings about pain may be a way to share emotion, gain emotional support, and build closeness in a relationship.

So, if you think about the typical male response (let’s call him Bill) to fix their partner’s pain (let’s call her Sally), it’s easy to see how an opportunity may be missed. While Sally may be talking about her pain as a way to connect and get closer to Bill emotionally, Bill may miss the opportunity to respond with empathy, because he’s so focused on fixing things.

Bill’s “fix it” approach may be interpreted by Sally as rejection or lack of caring. This is ironic because Bill probably feels like he is offering the best kind of care by trying to fix things for Sally. However, Sally would like nothing more than to hear “I’m sorry you’re in so much pain,” or “I know how difficult it is for you to be in such pain.” While it might not be a natural response for many men, what the female is asking for here is really much easier to deliver than coming up with a “quick fix”.

What does this mean for the relationship between a man and a woman? Well, if one partner is talking about their pain to get emotional support, but doesn’t get it, it can lead to the interaction heading in a negative direction. The female may feel rejected and hurt, which in turn leads her to say or do something angry, or to withdraw. This may strike the male as odd, since from his point of view he is trying to help and take care of her. His female partner’s anger or withdrawal may then lead him to communicate something that further distances himself from her. You can see where this might be heading – both partners feeling hurt and not communicating. In the end, a missed chance for building intimacy and closeness.

Empathy, caring, and concern are some of the things a female (and usually any person with pain) desires most when they tell their intimate partner that they are hurting. They are not looking for problem-solving skills. What does it take to communicate more effectively about pain? On one side, for the partner with pain it takes skill to state what it is that they really want, and to say it again if they don’t get it the first (or second, or third) time they ask. In addition, some people have a very difficult time asking for help, or seeking emotional support, and they may not know how to communicate these needs in a clear way.

On the other side, for the partner who does not have pain, it takes the ability to listen really carefully for what it is that is being asked for. This is not as easy as it may sound. It means accepting the fact that there may be nothing that can be done to stop the pain. This can be hard to do when someone sees a person they love suffering. The typical male may not see how simply acknowledging the situation may be the best response, and may find it hard to sit with difficult or painful emotions.

In addition, there are the messages in our culture that are especially directed towards men, such as “fight through the pain” or “tough it out.” These messages may lead men to believe that acknowledging emotion, or crying, in the face of pain, is a weakness that must be avoided at all costs.

However, if Bill and Sally can find a way to effectively communicate and respond to each other, while not seeking to fix or change the distress, it can help strengthen their relationship. Researchers have found that communication that shows the other person is listening and wants to be a support, leads to greater satisfaction for both partners. Keep the following tips in mind:

Back in the bedroom: Sex and back pain