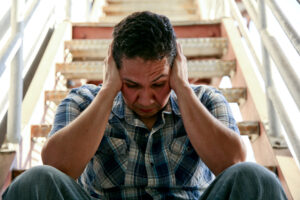 Barbara is pleased with how she manages her chronic pain by using medication, exercise, and meditation.  But at times she will have a sudden feeling of panic, causing her heart to race.  When this happens, Barbara struggles to regain control.

It’s not unusual for some people who cope with chronic pain, to feel occasional, sudden surges of fear or panic.  These feelings can make your blood pressure and heart rate increase, leave you feeling on edge, and can even interfere with you being able to complete your normal daily routines.

Fear and panic happen when a person perceives danger.  Physical, mental and behavioral changes take place in response to fear and panic, and are meant to help an individual take action to avoid harm. However, sometimes feelings of fear happen when a person misjudges the potential for actual harm.  No real danger exists, but the body prepares to protect itself.  This is commonly known as the “fight or flight response”.

Because the mind and body work so well together, sometimes, even when there is no real danger of harm, the brain “invents” an explanation, such as “I’m losing control”.  This in turn can trigger the body’s emergency response again.  This cycle can build on itself, and turn into extreme fear or panic. It can lead to very unproductive thoughts like “This pain is going to kill me.”

The first step is to begin by paying close attention to what errors in thinking are taking place. Then, use this awareness to challenge the unproductive thoughts that result, and replace them with more helpful thoughts.

Here is how her therapist helped Barbara to become aware of her errors in thinking.

Therapist:  What do you mean when you say those sharp pains bring on a feeling of dread?

Barbara:  I feel very scared, like something bad will happen.

Therapist:  What do you feel scared of?

Barbara:  That something is going very wrong with my body.

Therapist:  What could happen?

Barbara:  That the pain will get so bad I will die.

Therapist:  That your pain is going to kill you?

Therapist:  Even though you know that pain cannot make a person die.

Barbara:  I know that, I just get thinking it will, and it gets totally out of control.  Sometimes I even end up thinking about my funeral.

Therapist:  So, what you are worried about is based on something you know cannot happen?

As you see, when the therapist helped Barbara to recognize what was behind her thoughts, it provided an opening to challenge and get rid of the underlying cause of her fear.  Her therapist helped Barbara to replace the unrealistic and negative thought that she is going to die, with a more helpful thought.  A good replacement thought she can use is “I know this increase in pain won’t kill me and I have time to call my doctor.”

Since Barbara was able to recognize and challenge her negative thoughts, it became easier for her to stop thinking that the pain would cause her to die. She could call her doctor for advice and reassurance, without being in a state of panic.

Ways to reduce anxiety when you have chronic pain